One thing up front, I love Romance. I need it in the books I read, the ones I write and in real life. I am not one to read contemporary romance though. For me it always has to have a bit of fantasy or paranormal mixed into it (or the other way around). I read One Weekend Away despite that (come on guys…be honest. The cover is just on-frigging-point!) and holy hell, am I glad I did! 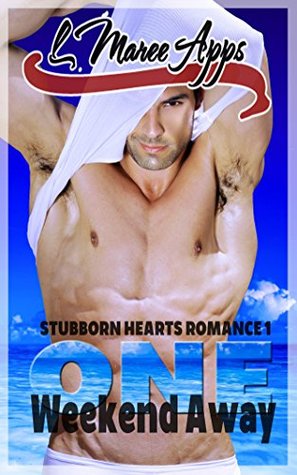 I read this story once a good while back on wattpad, from which the first draft, save for a sample, will be removed in the next two days. When it was self-published I bought it. Yes, I liked it that much.

What I think about it:

This book made me laugh out loud. The humor and the comical situations are fantastic! They both flow without feeling forced or in your face, and I’m always one for the giggles. Both main characters are witty, stubborn and completely smitten from the moment they meet. Now, one might bash that fact, but as the characters become dear to the reader over the titular weekend, it is the time after that which makes one realize; ‘yes, this is it, this makes sense.’ In no part of the book did I get the feeling that the relationship was forced, or was something that wouldn’t actually happen.

The character growth was plausible and fun, hot and heart-wrenching to watch. I got to know both Mitch and Kenzie, I related to them and enjoyed every page with them. That is always a ‘job well done’ by the author.

The sparks flying between Mitch and Kenzie from the very beginning were fun to read and I absolutely loved their banter. And yes, the ‘bedroom-art’ as I like to call it was hot. Really hot! But it wasn’t over done and I didn’t get bored by too many smexy scenes. Just right.

This book gripped my curiosity and had me turning pages late into the night, both times I read it. Which is, in my opinion, one of the greatest compliments I can give it.

What’s right with it:

The character growth is steady and makes sense. All side characters bring something to the table, be it fun, suspense or WTF moments. The twists in OWA are great and carried out nicely. Even though the author is Australian and therefore the book has some Australian words and phrases, I understood everything and felt right at home. (There is a handy little guide in the beginning explaining some words used) It is well edited and I found close to no obvious mistakes concerning spelling and the likes.

The pace is comfortable and flows lovely. Being a romance, of course there is a happily ever after. In some cases it is over done, in this case it isn’t. It leaves room for imagination of what will happen next, and it is absolutely plausible, fitting even, that this sort of HEA would happen the way it does.

What’s wrong with it:

Hmm. I had a hard time coming up with something. There was only one thing that bothered me slightly, and it is a bit hard to explain cause it’s so minute.

The chemistry between Kenzie and Mitch is electric and very sexual, obvious and deliciously so. I got that in every scene they were in together, but there were sometimes lines he or she thought that felt like they tried to hammer home how sizzling the attraction is. I felt a little beaten over the head with those. But would have gotten it just fine without those few extra lines.

If you love contemporary romances, and steamy bedroom-art, then this is for you. That isn’t all this is though. It takes you on a journey and even discusses themes like being a woman in a field dominated by men. It’s fun, it’s heartbreaking and it’s distinctly hot.

If that is your thing, go read it! You won’t regret it.

And as promised, the outcome of the experiment so far.

Writer View all posts by victorialarque

2 thoughts on “Review: One Weekend Away by L. Maree Apps”